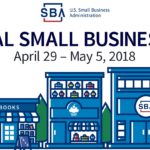 National Small Business Week shines a spotlight on our nation’s 30 million small businesses. Through awards ceremonies, media interviews and community events, we honor entrepreneurs whose achievements stand out. As an entrepreneur myself, I know the hard work that goes in to starting and building a small business – efforts that don’t often get the attention they deserve.

Honorees in this week’ spotlight do not cast a shadow that dims the efforts of others; rather they serve as a beacon – to competitors, up-and-comers and communities as a whole. They show what is possible. They are innovators and problem solvers, creating products and services that are better, smarter or more efficient than what came before. They are risk takers. And through their success, they inspire others to dream and to create small businesses of their own.

Small businesses contribute so much to our communities and economy. They create two out of every three net new jobs in the private sector. More than half of all Americans either work for or own a small business. Entrepreneurs are not only making a living for themselves, they are making their neighborhoods vibrant places to live and work and contributing to our nation’s economic strength.

The U.S. Small Business Administration is so proud to have been a part of small businesses’ success for 65 years. Since 1953, the SBA has been supporting entrepreneurs with the tools they need to succeed. The Agency – through its headquarters in Washington, DC; its 68 district offices nationwide; and resources partners like Small Business Development Centers, Women’s Business Centers, Veterans Business Opportunity Centers and SCORE chapters – serves entrepreneurs at every stage of their lifecycle. It guarantees loans for entrepreneurs who can’t get capital from other sources, mitigating a lender’s risk. It offers counseling on starting and scaling a business, from how to draft a business plan to how to export products overseas. It trains small businesses to compete for government contracts. And it helps those recovering from a declared disaster get back on their feet.

Whether they are starting up, expanding or getting through a tough time, the SBA is the nation’s only go-to resource for small business backed by the strength and resources of the federal government. It powers the American Dream. And the SBA is working to make that dream accessible to more Americans by modernizing its application processes, improving online resources, and streamlining how technology is used to deliver services more efficiently and effectively.

National Small Business Week honors entrepreneurs who have used these resources to make their lives and their communities better. And the SBA shines a light on their achievements, I hope it will illuminate the path for even more aspiring entrepreneurs following in their footsteps.