Buzzing Around the Texas State Fair

View from the Texas Star

I love fall in Texas.  The cooler weather, fall colors, Friday Night Lights football, and the sounds of the marching band from the local high school mean summer has finally faded for another year.  Fall also means the Texas State Fair or as we affectionately call it, the three F’s.  Fried foods, Football and Farm animals.  My husband works the fair each year to see how the FFA and 4H kiddos do in the show ring.  I don’t make it to the fair very often.  We have no farm animals, we do our best to resist the allure of corny dogs and fried Twinkies,  and we have no allegiance to the teams playing in the Red River Shoot out…yet.

With the State Fair winding down and a day off of school for the boys, we decided a visit was in order.  Morning is the best time to arrive, the crowds are thin and the weather cool.  Not quite cool enough for jeans and a sweater, but cool enough to walk around for a few hours.  Big Tex was in fine form, greeting everyone with his ‘Howdy” wave.  The car show was in full swing, and the smells of fried food filling the air.  We pursued the food vendors, watched a dog show, walked through the hundreds of vendors selling an array of items from sewing machines to hot tubs, and navigated our way through the Midway.  The view from the Texas Star was magnificent, although the ride was way too short.  The Texas sky was a brilliant blue as you can see from the photo.  And much to my youngest son’s relief, we survived the ride and several others he ventured on.

Spirit of the Horse

A trip the fair isn’t complete without a visit to the livestock barn.  While most of the animals had departed the horses were still there, and we had the pleasure of meeting with Robert Liner.  Robert and his team of cowboys & cowgirls preform the “Spirit of the Horse” demonstrations at the State Fair of Texas.  Liner, known as a local “Horse Whisperer” draws a huge crowd daily during the fair where he showcases general horse and horsemanship information for every level of interest.  And don’t forget those country manners!  A tip of the hat from this “Marlboro Man” and I was hooked.  Liner and his team of young riders were pleasant and friendly as they prepared for their next show.  A Purina “Ambassador”, Robert participates in several Horse Owner Workshops throughout North Texas and offers horsemanship clinics around the state. 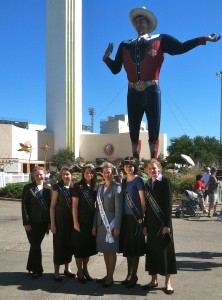 We also met the American Honey Princess and her court posing for pictures in front of Big Tex.   These beautiful young women travel the country and the state of Texas as spokespeople on the benefits of honey and the beekeeping industry.  Available by request, they speak at schools, clubs, fairs, and more promoting the preservation of honey bees.  Each of these young ladies are experienced beekeepers themselves.  While at the fair the royal Honey court preformed cooking demonstrations at the Texas Beekeepers Association Honey booth, showcasing how honey can be used in many recipes.  We briefly spoke with a few of the women who were on a break from cooking for a quick photo opportunity.

Consider your local Beekeeping Association as a resource when hosting events at the feed store!  This topic would make an excellent workshop for your customers, particularly in the spring and fall. You can find these groups on the internet or give me a call, I have contacts for them.

What a fun, educational day for the entire family.  We left the fair feeling full (see, the three F’s!), some from the fried food (ask Bob about the fried Twinkies) and others from the sites and folks we met along the way.