How to Use Story to Sell in Your Product Descriptions 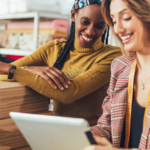 Let’s talk a little bit about the power of story for retail, especially when it comes to selling your products or services online.

Now, most of the time, as retail business owners, we learn a lot about the product or the services we offer. We become subject matter experts on those products or services. Sometimes, we get stuck in this kind of cycle where we think everybody knows what we’re talking about, like everybody knows these products and services and understands why they should buy them.

The reality is that we’re often basically regurgitating technobabble at them; all these little technical things like the features of the product or what makes it work. The way our prospective customers are wired, they may not care about those details.

Instead, they want to envision how the product or service can help them. What will it do to make their life or job easier? What makes it the top choice for them at this point in time?

And that’s where the power of story comes in. From a very young age, we’re told stories. Think about fables or tales from Mother Goose. Those fables are meant to calibrate our moral compass and instill morals in us. Each one of those stories had a moral it was telling us, such as to be kind to people or to stop and think things through before acting or to approach new situations slowly and methodically instead of fueling the boosters.

Just like you still find stories appealing, so do you customers.

Get all the tools you need to quickly find new customers and grow your retail store’s sales.

Start a Free Trial of Constant Contact for Retail

Why your customers care about a product’s story

Let’s take that same impact of storytelling at a young age and think about how it relates to our customers. As we grow, stories stay with us. So then, wouldn’t it make sense that storytelling lends itself to us being able to sell products or services? And wouldn’t it make sense that if we can tell a story about a product, then people are more apt to feel familiar with that product, to be receptive to us trying to have them buy that product, to envision themselves owning that product?

Here’s an example for you: A very elementary way of selling is through Craigslist or Facebook Marketplace or apps like LetGo. We’re selling something from one person to another; no business involved – just people. It could be anything from a used shovel to a gas grill to, in my case, a very ugly brown couch.

Years ago, when my wife and I lived in a condominium and we were planning out my office for Bryan Caplan Marketing, for some reason we bought this hideous brown couch.

Neither of us knows why we bought it. In fact, we blame one another for the purchase. Needless to say, for years, we’ve been stuck with an ugly brown couch, and we put baby in the corner (in the basement).

Years later, we’re looking at ourselves thinking, why the heck do we have such an ugly couch and how do we get rid of it? With that, we posted on Facebook Marketplace, where most of the world posts their stuff, whether they’re giving it away for free or trying to sell it at a highly discounted price to offload quickly. Of course, where someone has to come and manually carry this couch out of my house, I’m going to put it at a lower price.

Attempt #1: Trying to sell the couch with a plain description

So my wife started by posting the couch up for $200. She wrote the ad, highlighting that it was a gently used, light brown couch with microsuede material. It folds out into a bed, but it doesn’t have a mattress.

It reminded me of an ad I read way back when in the AutoTrader magazine. I’ll never forget when someone posted a nice looking car saying, “Great body. New steering wheel. Runs great, needs engine.”

In the ad, my wife highlighted that the couch was seven feet long, gently used, purchased from a reputable furniture store in New England, and it cost over $900.

But who cares — he thing is still ugly, and it has no mattress!

Well, here’s what happened: Crickets! No one responded. And it got so bad, and my wife grew so impatient, that she started sharing it on personal posts saying, “It’s free! Come take this away from me.”

She was being cute (as she always is) but people were reading into this as desperation that we needed to get rid of this ugly brown couch. Nobody wanted it because we focused on the technical instead of the experience.

As I laughed “with” my wife in her frustration, I offered to take a stab at the ad. I brought the couch to life. It wasn’t just a couch anymore. It was a character, and I did some fun stuff with my graphic design skills to show Mr. Bean and the Seinfeld cast sitting on the couch. I knew one of those two would grab people’s attention, and if I could grab their attention (also known as hooking them in) then I could have them become familiar with the artist known as my ugly brown couch.

I wrote a story about the couch. You can read the full description below, but I made it a character on a tv show. As I playfully talked about the character wrapping up its final season at our house, I inserted little facts about it:

“The smooth feeling of this easy to clean fabric allows for comedy genius to begin brewing in mere minutes. In fact, some of the best dad jokes of 2019 and 2020 have been created on this couch.”

“Spoiler Alert: this couch turns into a bed. That’s right. This cutting edge technology was imported by the most brilliant minds in Switzerland…”

“Plot Twist: A three year old boy who shall remain unnamed thought it would be a good idea to poke the air mattress with a pen. As a result, the air mattress character was pulled from the show…”

Here’s where the power of story took over. This was no longer an ugly brown couch; It had come to life. All of a sudden, we had over 700 views of the listing, six people saving the listing, and nine people sharing the listing. (Remember, my wife had to basically plead with people to consider taking the couch.)

Now I start getting messages from people like: “Bryan, I don’t need a sofa, but if I did, I would buy yours simply for the comedy gold description.” The story got people commenting and interacting and engaging with the actual post on Facebook Marketplace.

Creating a story helped me sell the couch

Well, guess what? In less than a day, someone took it off our hands. So, my friends, I ask you: Do you want to buy a seven-foot micro suede couch, or do you want to buy something that has brought happiness and joy and fun and comedy to a house? Something where some of the best dad jokes have been invented, where the best minds in Switzerland have come up with this insane technology?

That’s the power of a story! As you’re thinking about your products and services, and of course, your ideal customer’s persona, it’s crucially important for you to think about how you can tell them a story that makes them more likely to relate your product to their lives, moving them towards a purchase.

The power of a story is so amazing that if you do it right for your products and services, I’m confident you can sell anything you want. I hope you’ll take this to heart when you’re thinking about how you communicate with your customers. Use the power of a story!

The post How to Use Story to Sell in Your Product Descriptions appeared first on Constant Contact.